Uneven recovery expected due to the Delta variant threat

GDP rebounded in the first half of 2021 with some signs of recovery in private consumption, investments and trade, as restrictions have been gradually eased locally. Going forward, the economic recovery is likely to be uneven due to the recent surge in COVID-19 cases linked to the Delta variant across the world, which threatens external demand and tourism. Tourist arrivals dropped by 99% year-over-year in the January-June 2021 period, as restrictions continue to constrain inbound arrivals. Prospects for the tourism industry remain bleak, as international borders will remain shut until the end of the year. Private consumption (65% of GDP) has suffered from the social unrest, which started in June 2019 and from the pandemic over the first half of 2020. However, the enactment of the National Security law in June 2020 means that the resurgence of large-scale protests is unlikely. Pressure on private consumption should therefore ease in the second half of the year. Furthermore, household spending is expected to receive a boost from an improving labour market (unemployment rate at 5.5% in Q2) and a HKD 5,000 consumption voucher to residents. The voucher is part of the HKD 120 billion (4% of GDP) stimulus unveiled in the 2021-22 budget by the government to reduce the economic scarring from the pandemic and protests in 2019, which also includes cuts in profits and salaries tax for businesses. Investment (21% of GDP) growth is expected to recover, but may come under pressure from growing concerns over the National Security law and Hong Kong’s autonomy in western countries. Credit conditions will prove supportive as monetary policy remain accommodative, in line with the near-zero rate policy undertaken by the U.S. Federal Reserve (Fed) since March 2020 because of the pandemic. The Hong Kong Monetary Authority (HKMA) follows the monetary policy moves of the Fed, since the currency is pegged to the U.S. dollar. With a housing shortage, excess liquidity and low interest rates in the U.S., housing prices had hardly experienced a drop and started to rebound as property buyers gained confidence of signs of economic recovery.

Large budget deficit in FY2021, albeit cushioned by large reserves

Hong Kong registered the largest budget deficit ever recorded in the financial year ending March 2021, but it should decrease to 3.6% of GDP for the next fiscal year. This is mainly due to the pandemic, which urged the government to undertake policies prioritising the economic recovery and employment, with a package of relief measures amounting to 4% of GDP compared to 2% of GDP for the new fiscal year, as the economic recovery is underway. The prudent policymaking approach over the years has led to large fiscal reserves, accumulated for rainy days, which represent 22 months of expenditure.
The trade balance surplus should pick up slightly, as exports should increase faster than imports, since these largely dominated by re‐exports to and from China, which is recovering. However, tourism should continue to weigh on the current account surplus. Financial services should remain dynamic despite pressures on capital inflows because of geopolitical uncertainties. Banks’ balance sheets, which saw a slight deterioration in 2020, as well as a deterioration in credit quality, are still resilient and should remain so in 2021 thanks to strong capital and liquidity positions. Furthermore, Hong Kong is a top global Initial Public Offering (IPO) centre and the largest financial hub in the region, with assets under management (AUMs) far exceeding those of regional competitors such as Singapore and Tokyo.

Chief Executive Carrie Lam’s pro‐Beijing establishment coalition lost the majority in the District Council election in 2019. Her popularity has plummeted since the Extradition bill, and sunk further with the National Security law passed by China on 30 June 2020. This law stipulated four offences ‐ secession, subversion, terrorism and collusion with foreign forces ‐ and granted broader powers to the Hong Kong police. Critics from western countries saw this move as an attempt to curtail protests and freedom of speech. In response to this, the Trump’s administration put an end to Hong Kong’s special status with the U.S. through a call to label imports from Hong Kong as ‘Made in China’ from September 2020 onwards, and restricting visas for Chinese officials. Biden’s administration should follow this stance too. That said, the impact could be somehow limited, as more than 80% of Hong Kong exports consisted of re‐exports from China to the U.S., while only 1.2% were domestic exports.

An overhaul of Hong Kong’s electoral system, including the Legislative Council, is imminent following China’s National People’s Congress’ passing of a resolution in March 2021 for Hong Kong’s electoral reforms. The reform would increase the number of seats (70 to 90) but reduce the number of directly elected ones (35 to 20), with none from the local council. The Election Committee will elect 40 seats, while 30 would remain trade-based functional constituencies. There will also be a new vetting process for potential legislative candidates.

Bank transfers are one of the most popular payment instruments for international and domestic payments in Hong Kong, thanks to the territory’s highly developed banking network.

Standby Letters of Credit also constitute reliable payment methods, as the issuing bank guarantees the debtor’s credit rating and repayment abilities. Irrevocable and confirmed documentary letters of credit are also widely used, as the debtor guarantees that a certain sum of funds will be made available to the beneficiary via a bank, once specific terms agreed by the parties are met.

Cheques and bills of exchange are also frequently used in Hong Kong.

During the amicable phase, the creditor sends one or more notice letters (summons) to the debtor, in an attempt to persuade them to pay the due debts.

The Practice Directions on Mediation, introduced in 2010, set out voluntary processes that involve trained and impartial third party mediators. This helps both parties involved in a dispute to reach an amicable agreement for repayment. Debtors and creditors are usually urged to pursue this process before resorting to legal action.

Hong Kong’s District court and High Court allow legal representation. Cases in these courts are initiated by issuing a Writ of Summons to the debtor, who then has 14 days to file a defence. The creditor is also required to file a notarised Statement of Claim. If the debtor responds to the Writ and requests a payment plan, the creditor has two weeks to reply. If the parties find it impossible to enter into an agreement, a hearing will be called for by the judge, during which a judgment is normally made. If the debtor does not respond, a default judgment can be rendered.

Enforcement of a legal decision

A domestic judgment is enforceable once it becomes final (if no appeal is lodged within 28 days). If the debtor fails to comply with the judgment, the creditor can request an enforcement order from the court. This usually entails either a garnishee order (allowing the creditor to obtain payment of the debt from a third party which owes money to the debtor), a Fieri Facias order (which enables a bailiff to seize and sell the debtor’s tradable goods), or a charging order (for seizing and selling the debtor’s property to satisfy the debt).

Foreign judgments are enforced under the Foreign Judgments (Reciprocal Enforcement) Ordinance. Decisions issued in a country with which Hong Kong has signed a reciprocal treaty (such as France or Malaysia) only need to be registered and then become automatically enforceable. Where no such treaty is in place with a country, enforcement can be requested before the court, via an exequatur procedure.

An Arrangement on Reciprocal Recognition and Enforcement of judgments in Civil and Commercial Matters (REJA) was concluded with the People’s Republic of China in 2006. This makes judgments rendered in Mainland China or in Hong Kong automatically enforceable by the courts of the other contracting party.

The only formal insolvency procedure under the Companies Ordinance Act is liquidation.

The law does not provide for formal procedures for restructuring company debts. Restructuring proceedings therefore need to take place through informal “workouts” or a scheme of Arrangement.

A workout is an out-of-court agreement made between a debtor company and its major creditors for the rescheduling of its debts. This proceeding can be initiated at any time. Restructuring plans are usually recommended by a committee which is chaired by a lead creditor. The courts are not involved and the process is entirely voluntary. Once a plan has been agreed, the company continues to operate and is managed under the terms of the arrangement. This procedure does not provide legal protection from creditors.

Creditors can initiate a compulsory liquidation by filing a winding-up petition with the courts on the grounds of insolvency. An MVL is a solvent liquidation process whereby all creditors are to be paid in full and any surplus distributed among the company’s shareholders. CVLs are insolvent liquidations.

The Hong Kong Government Gazette’s Companies (Winding Up and Miscellaneous Provisions) Ordinance 2016 (“Amendment Ordinance”) entered into force on February 13, 2017. These updates were introduced in order to increase protection for creditors and to streamline and improve regulations under Hong Kong’s corporate winding-up regime. 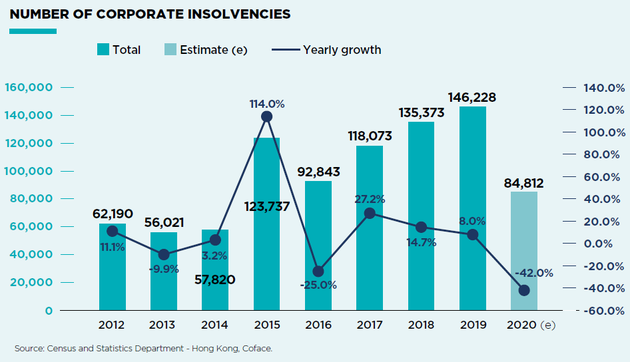